What we carry forward takes inspiration from explorations of inheritance and the public realm elaborated across GTA21’s physical and digital spaces. Unfolding over the course of four months, the series pairs artists’ films, videos, and animations that together open up questions around remnants and legacies, ownership and agency. Work by artists Allora & Calzadilla, Theo Eshetu, Mona Hatoum, Samson Kambalu, Tuấn Andrew Nguyễn, Aura Satz, Cauleen Smith, and Cecilia Vicuña will be featured. 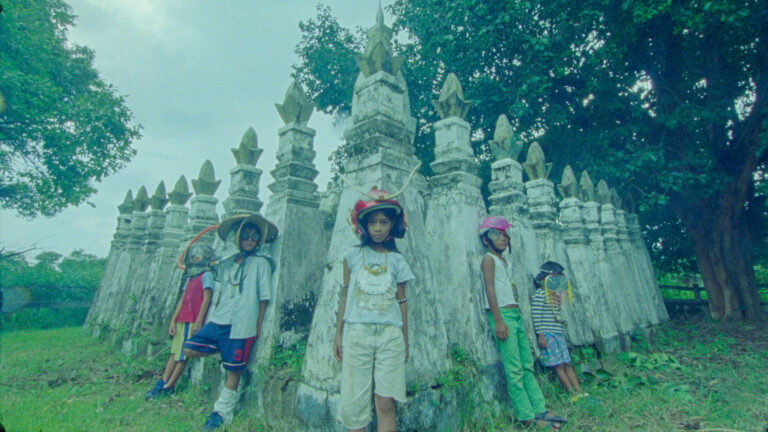 On view on MOCA’s website November 1, 2021 through February 28, 2022, the programme begins with Samson Kambalu’s A Thousand Years (2013) and Dogs See Invisible Things (2016) and Tuấn Andrew Nguyễn’s The Boat People (2020), which take imaginative, cinematic approaches to engaging with traces of the past. Allora & Calzadilla’s Returning a Sound (2004) and Theo Eshetu’s The Return of the Axum Obelisk (2009) centre acts of reclamation and repatriation, while Mona Hatoum’s Roadworks (1985) and Aura Satz’s Preemptive Listening (Part 1: The Fork in the Road) (2018) insist on maintaining signs of public resistance and resilience. Cecilia Vicuña’s Paracas (1983) and Cauleen Smith’s Pilgrim (2017) close the programme by animating objects and sites with the creativity and generosity of spirit of those who shaped them.

“This series brings together a range of voices and artistic approaches, each prompting different ways of thinking through the question of what we carry forward. It moves from the immediacy of objects encountered in the landscape to more intangible sounds, gestures, and feelings. I’m very grateful to MOCA for the opportunity to convene and make accessible powerful works by a remarkable group of artists” said Carly Whitefield.

MOCA launched Shift Key in spring 2020 as a way to present and support more artists via the Museum’s online platform and to expand its digital offerings. After initially curating the programme in-house, MOCA now invites guest curators to select artworks that feel relevant at this moment and can be shared online to watch for free. Previous curators have included Daisy Desrosiers and Native Art Department International (Jason Lujan and Maria Hupfield). The videos are currently posted for a period of one month. Thereafter, an image and other materials remain, resulting in an archive on MOCA’s website —in image and text—as a document of the conversations and relationships formed so far. Shift Key is generously supported by Scotiabank.

“Shift Key is a critically acclaimed and much-watched platform for the work of cutting-edge international contemporary artists and curators. This edition of Shift Key brings international perspectives to MOCA’s fall programming, and provides a dynamic portal for MOCA to engage audiences beyond the Museum proper. We appreciated the opportunity to work with Carly Whitefield given her expansive expertise in this realm”, said MOCA Executive Director and CEO Kathleen Bartels.

Samson Kambalu – b. 1975 in Malawi. Lives and works in Oxford, England.

A Thousand Years (2013) and Dogs See Invisible Things (2016) form part of Samson Kambalu’s ongoing ‘Nyau Cinema’ series, a group of short films featuring spontaneous site-specific performances in public space often recorded by strangers. Each is silent and under a minute in duration. The films are informed equally by the aesthetics of early cinema and the improvised screenings Kambalu attended as a child in Malawi in the 1980s.

Kambalu’s work is autobiographical and approaches art as an arena for critical thought and sovereign activities. He is the winner of London’s 2022 fourth plinth commission in Trafalgar Square.

Set at the precarious edge of humanity’s possible extinction, The Boat People (2020) follows a group of children who travel the seas and collect the stories of a world they never knew through objects that survived. They find objects from a refugee crisis, a world war, and some of the earliest migrations in human history. Conversing with, replicating, and burning these remnants, they navigate political and spiritual forms of release of the entities they encounter.

Nguyễn’s artistic practice explores strategies of political resistance by re-working historical, fictional and supernatural narratives. He is a founding member of The Propeller Group.

Returning a Sound (2004) follows the sonic trail of a citizen’s journey from the town of Isabel Segunda around the demilitarized areas of Vieques, Puerto Rico, and back again on a moped whose muffler is fitted to a trumpet. The noise-reducing device comes to produce a resounding call to attention, acoustically reterritorializing an island which had for over 60 years been exposed to the ear-splitting detonations of the US Navy’s bomb testing programme.

The Return of the Axum Obelisk (2009) is a single-channel version of Eshetu’s elaborate, non-linear video installation, which charts the 2003–08 return of the obelisk of Axum to Ethiopia 70 years after it was confiscated in the Italian invasion and relocated to Rome. Built in the third century, the obelisk is a relic of the ancient Kingdom of Aksum, Ethiopia’s pre-Christian civilization.

Roadworks (1985) is a short video edited from documentation of artist Mona Hatoum’s hour-long performance of the same title, performed in the streets of Brixton in southwest London in 1985. In the performance, the artist takes long, slow strides through the street market with a pair of Doc Martens boots in tow.

Preemptive Listening (Part 1: The Fork in the Road) (2018) explores sonic obedience and disobedience through the trope of the siren. In the film, the sounds of Lebanese trumpet improviser Mazen Kerbaj are heard alongside actor and activist Khalid Abdalla’s account of the siren as the emblematic sound of resistance, oppression, and lost futures during the Arab Spring.

Aura Satz is an artist whose practice explores various sound technologies and the ways in which these might generate new soundscapes and new forms of listening.

Conceived as a visual and sound poem in seven scenes, Paracas (1983) is an animation of a two-thousand-year-old Pre-Columbian textile developed in the Paracas/Nazca region and now found in the collection of the Brooklyn Museum.
Vicuña is a poet, performer, and sound and visual artist, whose work emerges from a strong desire to preserve and pay tribute to the Indigenous history and culture of Chile.

Smith is an artist and filmmaker whose work explores Afrofuturism, spiritualism, utopianism, and Black creativity in equally powerful and poetic ways.

MOCA Toronto is motivated by the principle that museums and their programmes are culturally and socially beneficial to the diversity of the communities they serve. MOCA supports and promotes forward-thinking artistic experimentation and provides a community space for enrichment, discourse, collaboration, and creativity. Working across all contemporary art forms, MOCA’s programmes empower local artists and engage the Toronto art scene while contributing to the international art community and scholarship. MOCA is a not-for-profit charitable organization. The evolution of the Museum is made possible through a unique alliance with Castlepoint Numa, public sector funders, private donors, members, sponsors, and a network of cross-sectoral partners.

Operating funding for MOCA is provided by the City of Toronto, the Government of Ontario, the Ontario Arts Council, and the Canada Council for the Arts.