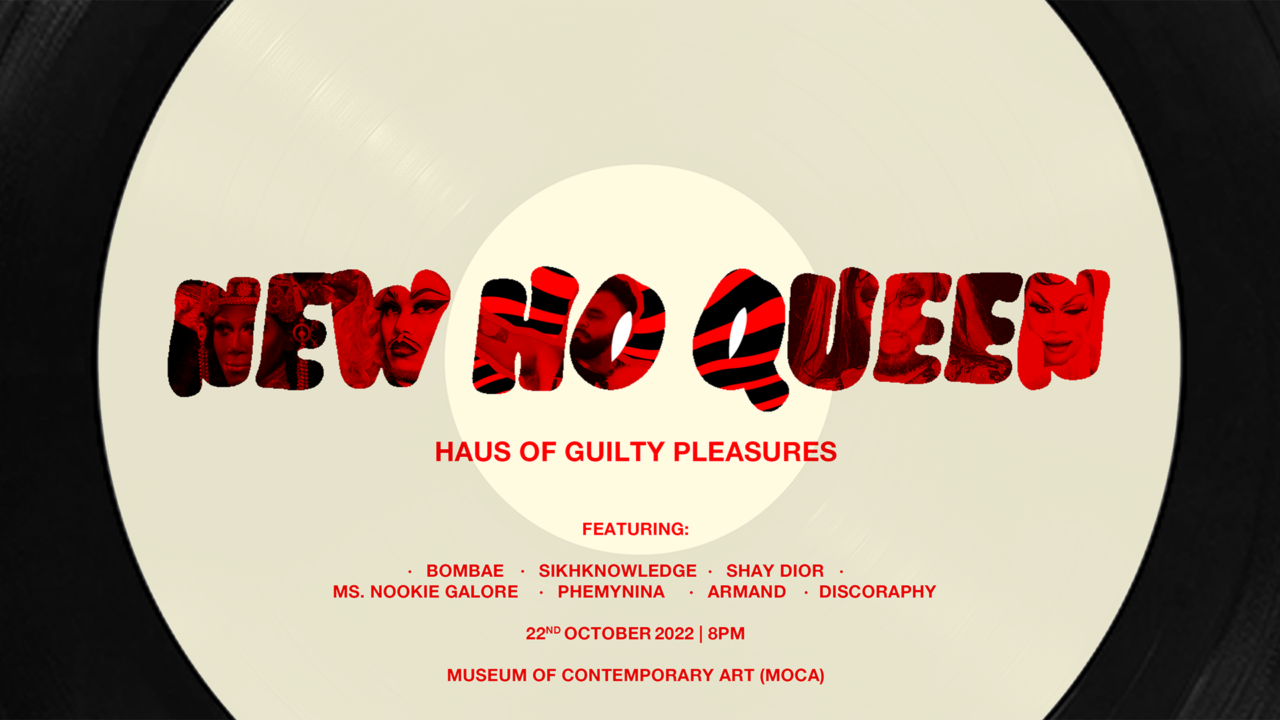 Join us for a New Ho Queen takeover of the MOCA on October 22, and celebrate your guilty pleasures with us!

New Ho Queen is a Toronto-based creative collective that focuses on providing spaces of celebration made for and by the queer Asian community. Through the fusion of art, nightlife, fashion, and performance, NHQ aims to create opportunities to reconnect with one’s own communities while uplifting the queer Asian creatives of the city.

In conjunction with Rirkrit Tiravanija’s untitled 2013 (thomas demand’s here), enjoy a series of curated live performances and karaoke from 8–11 pm.

Sing your go-to “happy place” song in the private karaoke booth and indulge in complimentary snacks, as you sip on cocktails and let your freak out on the dancefloor with our house DJs and performers. We will be joined by special guest DJ Sikh Knowledge, as well as performances by Ricecake’s Shay Dior from Vancouver and Bom Bae from Season 3 of Canada’s Drag Race.

Hosted by Armand and Discoraphy

Please note that this programme is reserved for ages 19+ and ID will be required upon entry. Drinks and snacks will be available for purchase.

Ms. Nookie Galore is a PilipinX horror-storytelling panda drag queen that is born on All Saints Day. They are often referred to as the Angel of New Ho Queen. Just joking, Ms. Nookie is a demon bitch. They have been spotlighted in CBC, the documentary “No Fats, No Femmes, No Asians,” performed at multiple galleries, theatre festivals, bars, and washroom stalls, and published in the book Diasporic Intimacies: Queer Filipinos and Canadian Imaginaries. Ms. Nookie Galore’s DRAG focuses on queering up the hustle and bridging our connection to “home.” Reminding us that dreaming is part of our survival and that nightmares are dreams too.

Phemynina (they/she, fka LOLA) is a Filipino trans non-binary drag performer. The persona of Phemynina is an evolution from her former drag persona, LOLA. For her, drag is an opportunity to access femininity and art on her own terms — a means of experiencing both gender euphoria and creative freedom all at once. One of the house performers of NHQ, Phemynina has seduced and tickled audiences at iconic venues such as The Gladstone Hotel for draglesque-show “Under Where?”, at Sky Dragon for “Asian drag-brunch Queens of Dim Sum”, and performed digitally for New York’s original Queer Asian party, “Bubble_T.”

Sikh Knowledge (he/him/his) takes well-simmered eastern melodies and marries them to thumpin AF drums evoking the east and west indies with tinges of underground hip-hop, 80s/90s reggae, and modernity. Sikh is independent to death and produces much of his own work.

Shay Dior is a Vietnamese-Canadian drag luminary whose aesthetic channels both King and Queen drag elements into a harmonious body of gender fluidity. They can often be found sharing their art and performing in drag at various venues, not only locally, but also internationally. With the purpose to increase representation, Shay Dior founded Canada’s only all-Asian drag family, becoming matriarch of the House of Rice. Chock-full of artistry and talent, the members of this house have collectively and individually become inspiring leaders for the queer and Asian communities. Dedicated to creating a world where queer Asians can feel important, Shay Dior also founded Ricecake, an event organization that initially began as a dance party celebrating the queer and Asian community by providing well-paid work and a platform for queer Asian entertainers. With tremendous support and love, Shay Dior and the team behind Ricecake has expanded beyond a dance party — Ricecake Events will first and foremost be a safe space for queer Asians to share joy, participate in activism, and express their excellence.

Bombae, from TV! Star of Canada’s Drag Race S3, Club Kid, Supermodel, and Human Disaster! Bombae is Toronto’s reigning Satanic Supreme. She’s a club kid who started doing drag in 2019. Since then she’s been performing all over Toronto. From The Beaver in the west end to Woodys in the village, she’s known for her outlandish costumes, ungodly makeup, and the ability to give you ART!