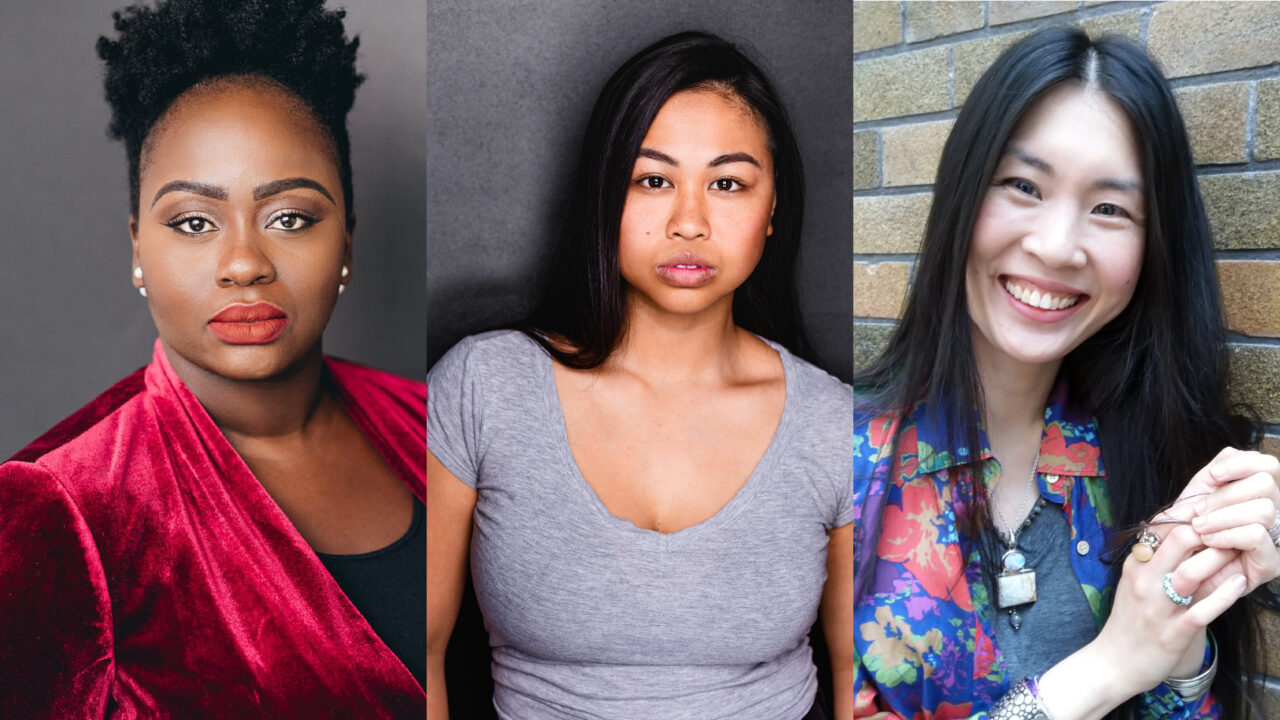 At the heart of MOCA and Necessary Angel is creative practice. Theatre artists, musicians, visual artists, creative producers, lighting designers—fostering collaborative creation and connection, between creators and audiences alike is why we are here.

Evolving from Necessary Angel’s 2020 The Resilience Project SHORTS, Coming Into View: EMERGENCE continues the practice of monologue performances, reflecting on the current state of artistic expression, as Toronto—and the world—gradually emerges from the trials and tribulations of a global pandemic.

Akosua Amo-Adem (she/her) is an actor, writer, and director based in Toronto. Throughout her career Akosua has appeared in a variety of productions around the city. Her selected credits include Obsidian Theatre’s School Girls; or the African Mean Girls Play (Head Mistress Francis), Venus’ Daughters (Venus/Sarah); Soulpepper Theatre’s A Streetcar Named Desire (Eunice), For Colored Girls…(Lady in Green), Father Comes Home From The Wars…(Leader/Runaway), The Crucible (Tituba);  Canadian Stage’s Tartuffe (Dorine) and Theatre Passe Muraille’s The Middle Place (as Kaaliha/Dee). She was the director of “Every Minute of Every Day” (a radio drama for Factory Theatre) and has appeared on the cover of NOW Magazine. Akosua is a published author with an article called “See Me” in Intermission online magazine and she is currently developing her first full-length play! Her on-screen credits include appearances on Odd Squad, Bitten, Frankie Drake Mysteries, 21 Black Futures, and American Gods. You can also see her as a series regular on the TV show Kim’s Convenience via CBC gem and Netflix!

athena kaitlin trinh (she/her) is a settler in Tkaronto, on the traditional territories of the Mississaugas, the Huron-Wendat, and the Haudenosaunee peoples. She is a Dora nominated acting graduate from the National Theatre School of Canada and the 2021 recipient of the Jon Kaplan Award for Young Canadian Playwright. She is a queer, Chinese-Vietnamese actor, writer, and spoken-word poet. With roots stemming from Viet Nam, Toronto, and Southern China, athena celebrates and dedicates herself to diverse, intersectional, and inclusionary art-making.

Phoebe Tsang (she/her) is a Hong-Kong born Chinese, British and Canadian poet, author, librettist and playwright. She is the author of the poetry collection “Contents of a Mermaid’s Purse” (Tightrope Books, Canada), and her fiction has appeared in Geist, Broken Pencil Magazine, Litro Magazine, Rivet Journal, the Literary Review of Canada, Asia Literary Review, The Bombay Review, and other places. Her music can be found on Off record label (Belgium), and her debut short story collection is forthcoming from Thistledown Press (Canada).

Tim Shia (he/him) has had the good fortune of playing with a host of Juno, Polaris and Grammy award-winning artists across a multitude of genres over the years. Past highlights include performing with Quique Escamilla, LEO37 and Amelie and Les Singes Bleus. The critically acclaimed Worst Pop Band Ever—Tim’s own group—has packed festivals and clubs across North America and Asia and has been featured on All About Jazz, NOW magazine and topped college radio charts. When he’s not performing, Tim has scored and licensed music for film and television, including work for CBC, the Toronto Public Library, Teletoon, the National Film Board and Disney. This includes a number of award-winning animated works produced by PPF House, the multimedia company that he operates with his brothers, Howie and Leo. Tim is a Dream Cymbals and Headhunters Drumsticks artist.