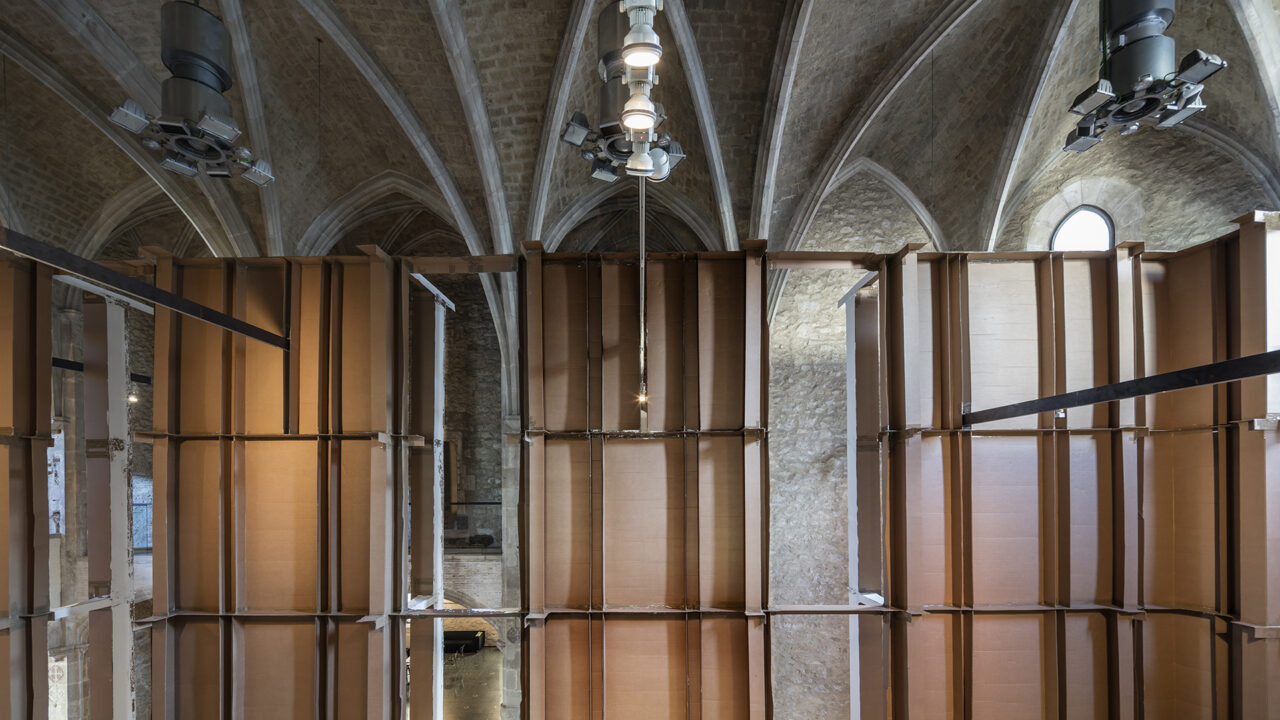 TORONTO, January 9, 2020 — The Museum of Contemporary Art Toronto (MOCA) today shared details of its exhibitions programme for the first part of 2020, featuring new commissions by Carlos Bunga, Shelagh Keeley, and Megan Rooney. An installation by Sarah Sze launches “The City Is a Collection,” a new exhibition series presenting major contemporary artworks from private art holdings within the Toronto community.

A preview of the four exhibitions opens to the public at 7:30pm on February 5, 2020. During the opening night, Bunga’s installation will be accompanied by a dance performance choreographed by Lauren Runions and performed by Runions, allie higgins, Denise Solleza, Yui Ugai and Shelby Wright.

Artistic Director November Paynter said, “We launch 2020 with four exceptional artists who are each transforming the space of the museum with strong physical statements. Committed to producing new artwork, we have commissioned Bunga, Rooney and Keeley to create entirely new interventions for the museum, that respond to the architecture and character of the building. These are artworks that will be formed and finalized in the space and we are all excited to see the outcomes in February.”

On view across two floors from February 5–May 10, 2020 (and through summer on entrance level). Curated by Adjunct Curator Rui Mateus Amaral

For his first exhibition in Canada, Bunga has been invited to produce two site-specific installations and a series of sculptural works for MOCA. Inspired by the simplicity of the Museum’s architecture and the rhythm of its columns, the artist will simultaneously underscore and challenge the building’s physicality. His formidable installations and nomadic sensibility will deepen his long-standing inquiry into some of the most poignant subjects of our time: stability, certainty, and permanence. Incorporated into the exhibition are several new sculptures made from locally sourced furniture including side tables, writing desks, gilded frames, and cabinets that are reworked into painterly cityscapes. Animating Bunga’s project further are short films of performative breakages — the smashing of a lamp and the bursting of a wall, for example — each of which express a rupture’s potential to be as much about a sudden beginning as it is the sign of an end.

Keeley’s MOCA exhibition combines a series of tarp paintings from 1986, a large-scale film projection from 2016, and a new ephemeral wall drawing that she will create on-site over the course of several weeks in January 2020. All three bodies of work are extensions of a conceptual process in which the artist weaves together the past, present, and future. The tarp paintings are shown on the floor and wall, grounding decades of Keeley’s practice within the frame of a particular gallery space. In her new wall drawing, Keeley interweaves photographic traces of the building pre-renovation, creating a poetic and gestural response to the history of the site.

Inviting us to bear witness to systems of production and hidden structures of power, her three-hour film essay Jardim do Ultramar / The Colonial Garden gradually reveals buried layers of history and colonial rule in Portugal. Keeley’s camera explores the buried social / political history of the garden bringing it forward to the present. The film is evidence of a past that will no longer lapse into silence and invisibility.

Rooney is a storyteller whose enigmatic work spans painting, performance, sculpture, and installation. Her ephemeral installations engage with themes of materiality and the human subject to explore the chaos of politics and the latent violence of our society, whether in the home, in female identity, or in the body.

For the artist’s first major solo exhibition in Canada, Rooney will transform a floor of the Museum by enveloping it in a large-scale mural, making use of all original walls. This temporary, site-specific environment will become home to sculptural characters and scenarios composed from ubiquitous household materials, found objects, stuffed fabric, and paint.

Having spent her teenage years in Markham, Ontario, Rooney’s experiences of suburban North America inform her choice of materials, colour palette, and subject matter. Her work explores notions of traditional femininity through the lenses of domestic space, the political haven of the garden, consumption-based societies, and the mythological. At the same time, Rooney probes how our bodies are informed by and respond to the environments, systems, and inanimate objects that surround us.

On March 27, 28, and 29, 2020, a three-chapter performance titled EVERYWHERE BEEN THERE, directed by Rooney and presented with collaborators Temitope Ajose-Cutting, Leah Marojevic, and Paolo Thorsen-Nagel, will further animate the stories Rooney’s work tells.

Images in Debris is one in a series of monumental, immersive sculptures by Sze where light, movement, images, and architecture coalesce into a single, precarious equilibrium.

Simultaneously a sculptural installation and projection tool, Images in Debris lends equal weight to images and objects, exploring the edges between the two and bringing both into dialogue with the surrounding architecture. At its center is an L-shaped desk, inspired by the artist’s own studio desk, which, acting like a projector in a planetarium, casts images onto an intricate structure extending from the desktop and across the gallery walls.

The imagery itself — much of it shot on the artist’s iPhone — often points to its own materiality or to changes in material state. A forest burns; water spills or splashes — a reference to Harold Edgerton’s famous 1936 photograph Milk-Drop Coronet Splash and to the earlier experiments of Eadweard Muybridge and Étienne-Jules Marey. Video edits, meanwhile, draw attention to processes of decay or transformation, images succumbing to pixilation or becoming ghostly like digital “snow.” In tandem, altered states of consciousness are suggested by imagery that draws on such motifs as that of a sleeping child. Within the slow loop of the imagery — in which repetitions take days rather than hours — beginnings and endings are willfully suspended. Here, Sze applies to sculpture the filmic idea of the edit, where meaning occurs in the splice, and the viewer, moving through the space, supplies their own narrative arc.

Sarah Sze’s Images in Debris, 2018, is on loan from Audrey and David Mirvish. Additional thanks to Victoria Miro Gallery, London, and Sarah Sze Studio, New York.

Sarah Sze lives and works in New York. Her work has been featured in museums worldwide including in The Whitney Biennial (2000), the Carnegie International (1999) and several international biennials, including Berlin (1998), Guangzhou (2015), Liverpool (2008), Lyon (2009), São Paulo (2002), and Venice (1999, 2013, and 2015). Sze has also created public works for the High Line and Second Avenue Subway Station in New York; the Massachusetts Institute of Technology, Boston; and the Walker Art Center, Minneapolis. Sze’s work is represented in the permanent collections of many institutions, including Museum of Modern Art, Solomon R. Guggenheim Museum, and Whitney Museum of American Art, New York; Fondation Cartier pour l’Art Contemporain, Paris; Museum of Contemporary Art, Chicago; San Francisco Museum of Modern Art; and Museum of Contemporary Art, Los Angeles.

She was awarded a MacArthur Fellowship in 2003.

A series of Drop-In Activities and Workshops relating to the above exhibitions will feature local artists including Laura Dawe, Dalia Hassan, Shelagh Keeley, Germaine Liu, and Christopher Willes.

MOCA is also accepting bookings for 2020 school visits starting on February 6 to explore exhibitions featuring the work of Bunga, Keeley, Rooney, and Sze on either a self-guided or guided visit. Book online at moca.ca/school-visits.

Please note: MOCA galleries will be closed until February 5, 2020, for exhibition installations. The on-site café Forno Cultura will remain open for normal hours. As of February 5, 2020, the Museum’s hours will be 11 am–6 pm Monday, Wednesday, Thursday, Saturday, Sunday and 11 am–9 pm on Fridays. MOCA is closed Tuesdays. Art in Use moves to Floor 1 and will be free to the public year-round.

MOCA is a not-for-profit charitable organization. The evolution of the Museum is made possible through a unique alliance with Castlepoint Greybrook Sterling Inc., public sector funders, private donors, members, sponsors and a network of cross-sectoral partners.

Key on-site partners bolster the museum experience, including a café by Forno Cultura and a shop by Art Metropole. Additionally, MOCA is home to over 30 artist studios facilitated by Akin and the offices of the Toronto Biennial of Art.

With additional support from: Barbara and Dougal Macdonald