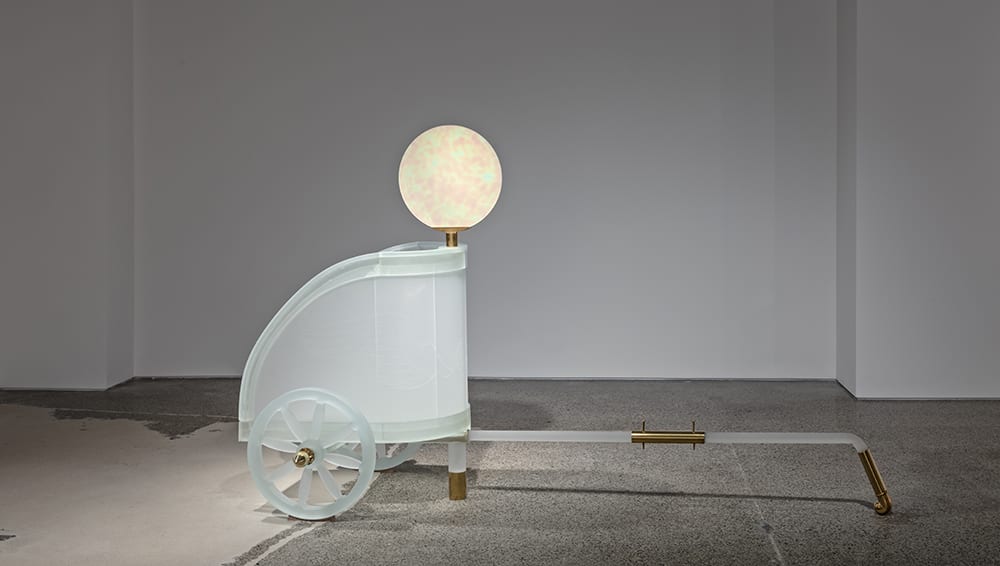 Tim Whiten is a Toronto-based creator of charged objects that embody myths and narratives, bringing these stories alive and affirming their relevance to the times in which we live.

Work by Tim Whiten is featured in MOCA’s inaugural exhibition, BELIEVE. His incredible glass objects, After Phaeton and Reliquaire, embody narratives related to power, belief, continuity of being and understanding our place in the world.

Tim Whiten was born in Inkster, Michigan and lives and works in Toronto. He is represented by Olga Korper Gallery. “I do not refer to myself as an Artist; I think of myself as an image maker who also creates cultural objects. In close to forty years creating works, I have sought to navigate the territory of the human condition and its transformative potential.”

After Phaeton embodies the mythological tale of Phaeton, son of the sun god Helios, who begged his father to let him drive the horse-drawn chariot of the sun. In a daring act of arrogance, Phaeton ignored his father’s cautionary warnings about the mighty powers of the chariot and crashed it into the earth, setting the planet ablaze. While Whiten does not insist upon singular interpretations of his work, After Phaeton can be understood in our current era as a lesson related to humility, privilege and power.

Resembling the sacred architecture of a church or temple, Reliquaire is a glass container that houses a human skull visible through a magnified lens. The skull, as a container for the brain, represents the locus of knowledge, imagination and identity. Most often relics are the preserved remains of someone who may have achieved great and extraordinary things, but the identity of this skull, obtained through medical and academic sources, is unknown. Whiten protects and elevates this “ordinary” person, acknowledging that all of life is sacred and important.

This event is free but requires pre-registration.