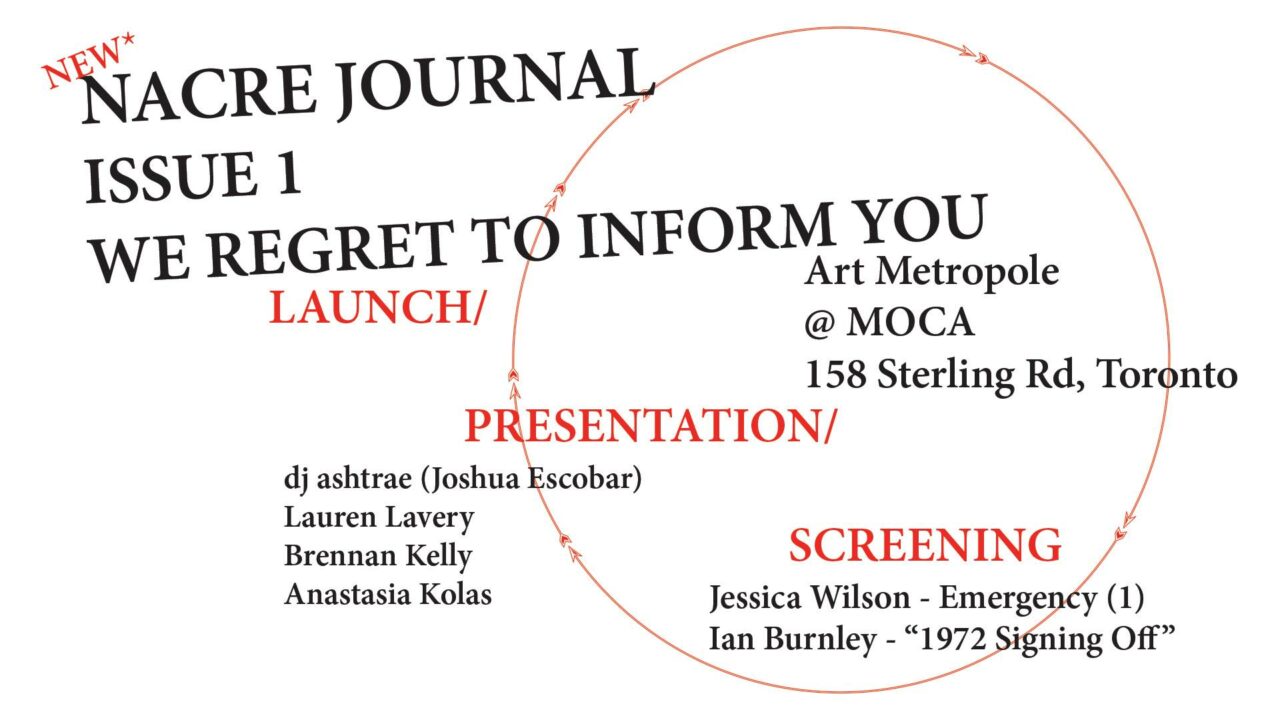 Join Art Metropole for the launch of Nacre Journal – Issue 1: We Regret to Inform You

Brennan Kelly is a Toronto-based visual artist, writer, and designer. He received an MFA in studio art from the University of Guelph in 2018. His work has been exhibited and featured in publications throughout North America.

Lauren Lavery is a Toronto-based visual artist, writer and editor of the exhibition review magazine Peripheral Review. Her writing has been published by LUMA Quarterly, Public Parking, Peripheral Review, and has written texts for Y+ Contemporary and Xpace Cultural Centre in Toronto. She has exhibited in Vancouver, Winnipeg, Toronto and Cambridge, ON. She holds a BFA with honours from Simon Fraser University’s School for the Contemporary Arts in Vancouver.

We Regret To Inform You

Born in Minsk, Belarus, Anastasia Kolas is a visual artist based in Toronto. She is the editor and founder of Nacre Journal. Through spatial installation, sculpture and lens-based media Anastasia traces image residue: her practice engages with accumulative effects of globalized aesthetic production as it is metabolized within locally configured environments. Anastasia holds Film/Video MFA from Bard College and Fashion Design BA from Ryerson University.

Through the live presentations:

Jessica Wilson’s work draws on methods used for architectural renderings, medical animation, game design, cinematography, and visual effects, developing computer generated characters and places. The environments she builds are textured with images she takes from the physical, virtual, mental and emotional worlds that she inhabits. Her work calls into question the notion of the invisible and the immaterial, asking if it is possible to reconsider seemingly invisible forces and the physical effects they have on a body. Jessica Wilson (b.1991) lives and works in NYC.

Ian Burnley is an artist and experimental filmmaker living in Queens New York. A native of New York City, he was born in 1985 in Manhattan, and was raised on Staten Island within a multiracial family; black and Polish. He received a BFA from The Cooper Union for the Advancement of Science and Art, and an MFA from the Milton Avery Graduate School of the Arts at Bard College. Ian is currently a faculty member at the School of Visual Arts, New York City, primarily teaching video and film courses at the undergraduate level.

“Forgery” is a process in which sleight-of-hand and camouflage are used to recreate the identity and provenance of a subject in order to subvert and replace it. This definition of forgery operates as a framework in Ian Burnley’s recent moving-image works. He often begins by finding an interview in an out-of-date newspaper or magazine and work with actors to re-imagine this outmoded conversation by transposing it from the past into a contemporary setting; printed words are voiced once again by living subjects. The uncanny, sometimes humorous re-embodiment of the original text is an invitation to viewers to reevaluate their own understanding of the source material, as well as the relationship between historical time, narrative conventions and authorship. The scenes described in his films and videos are moments in which nothing seems to fit neatly together at all.

Art Metropole is located at 158 Sterling Road, on the ground floor of the Museum of Contemporary Art, which is fully accessible. If you have any concerns about accessibility, please contact us at info@artmetropole.com.